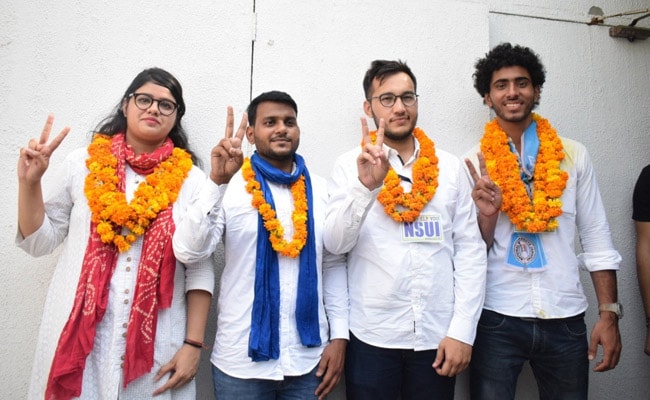 NSUI’s Chetna Tyagi is one of the four women out of the 12 candidates in fray for DUSU polls 2019.

The polls to the Delhi University Students’ Union will see a woman candidate fighting for the president post from the Congress-backed NSUI after a gap of 11 years while its rival ABVP had last fielded a woman candidate in 2011. Out of the 12 candidates in fray, there are only four women in contention. National Student’s Union of India’s Chetna Tyagi will take on Akhil Bharatiya Vidyarthi Parishad’s Akshit Dahiya and Left-backed All India Students’ Association’s Damini Kain for the post of president.

In 2008, the NSUI had fielded Sonia Sapra, who had lost the top post to ABVP’s Nupur Sharma.

Thereafter, the Congress’ student outfit has not fielded any woman candidate for the president’s post.

Its arch-rival, RSS-backed ABVP, had fielded Neha Singh for the top DUSU post in 2011 but she had lost to the NSUI candidate.

The Left-backed AISA, however, has preferred women for the president’s post, with the last year being an exception, when they fielded Abhigyan.

Read: Delhi High Court Refers To Jaitley, Asks DU Not To Be Harsh With Student Leaders

The ABVP has fielded Pradeep Tanwar for the vice-president post, Yogit Rathee for the secretary and Shivangi Kherwal for the post of joint secretary.

ABVP’s presidential candidate Dahiya completed his BSc in Physical Sciences from Ramjas College in 2019 and is currently in his first year of LLB at the Faculty of Law.

He is a silver medallist in bodybuilding from the Delhi University.

Pradeep Tanwar completed his graduation from PGDAV College in BA programme in 2018 and is currently pursuing his masters in Hindi from Deshbandhu College.

He is currently in third year LLB at the Faculty of Law.

Kharwal completed her graduation from Shyama Prasad Mukherjee College in B.A programme this year and is currently pursuing her MA in Buddhist Studies.

She is a member of ABVP National Executive Body.

The NSUI has fielded Ankit Bharti for the vice-president post, Ashish Lamba for the secretary and Abhishek Chaprana for the joint secretary post.

Their president pick Chetna Tyagi has been a DUSU executive councillor and a swimming player. She is currently studying at Shaheed Bhagat Singh College (Evening).

“At a time when the BJP is protecting rapists and RSS is promoting misogyny, the NSUI is proud to announce that our DUSU president candidate is a bright and fearless woman,” NSUI national in-charge Ruchi Gupta said.

NSUI’s DUSU vice president candidate is a Dalit student, Ankit Bharti, who will not only raise the discrimination and problems faced by SC/ST students in Delhi University but also the shocking razing of the ancient Ravidas mandir in Delhi, Ms Gupta said.

Read: Our Alliance In JNUSU Polls Is ‘Conscious Unity Of The Oppressed’: BAPSA-Fraternity

Abhishek Chaprana, a young student activist and son of an ordinary farmer, will run for the post of joint secretary, she added.

“The NSUI is committed to equal educational opportunity for all Indian youth. Our DUSU panel is reflective too of our commitment to women empowerment, social justice and equal opportunity across class and caste,” she added.

“We are also proud to note that a woman candidate has been named the presidential candidate for the first time by either ABVP or NSUI since 2011,” Ms Gupta added.

The AISA has fielded Aftab Alam for the post of vice president, Vikas Kumar for Secretary and Chetna for the joint-secretary post.

Read: DUSU Vice-President Takes Over As Chief, NSUI Calls It Contempt Of Court

Kain has been a topper throughout her graduation in Jesus and Mary College. She was a topper in her master’s entrance in Jamia Millia Islamia University and in Delhi University MA entrance for political science. She has been on the forefront for the movements related to social justice in and outside the campus.

Alam did his graduation from Deshbandhu College and led various movements in his campus.

Kumar did his graduation from Dyal Singh College and secured admission in Hansraj College in MA Hindi. He has been a leader of the AISA since past three years and is its prominent face in DU. He has been on the forefront in the movement for affordable transportation which ensured the validation of bus pass in AC buses, the student outfit said.

Chetna is a first year student of Miranda House college and is the youngest member of AISA. She hails from Sirohi district in Rajasthan and is the first women in her village to come to Delhi to pursue graduation, it added.