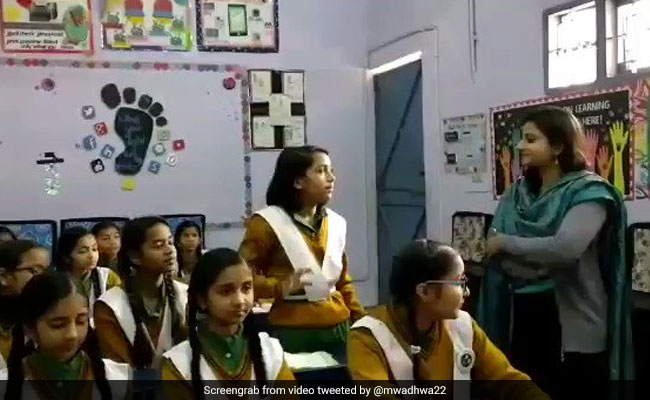 Over 10 lakh students between Class 1 and 8 share the 45-minute Happiness Class.

Rohan Rai, 10, is not stressed any longer by the thought of seeing his teacher after going through the morning assembly routine at this government school in central Delhi.

In fact, Rohan and his classmates are thrilled and excited to be in the classroom. They no more begin their day by scratching their heads to solve sums or struggling to get the grammar right.

Instead, they relax and meditate in what is termed as the “Happiness Class”, introduced in Delhi’s government schools last year.

A typical Happiness Class starts with students rubbing their hands and putting them on the eyes to relax. A little bit of meditation follows. Children are themselves feeling the sounds of their surroundings.

At peace with themselves, they then go into discussions and exchange their own ideas about anything under the sun. The 45 minutes pass with happy faces all around — and it is now time to take out books.

“Initially, I thought this will be a new subject. However, this turned out to be an interesting session where we not only do meditation and listen to stories but also take part in various activities,” said the Class 6 student.

The Happiness Curriculum of the Delhi government is helping students to change their attitude towards studies.

According to Rohan, during the Happiness Class, the students focus on things they would otherwise skip.

“We meditate and focus on sounds — like our heartbeat and sounds in nature,” he said.

“The period begins with a few minutes of mindfulness practice, followed by a story or activity and reflective discussions. Each one of us is given a chance to reflect and express our thoughts about the story or activity.

“We are asked to draw or write about whatever we are feeling or like. We are also asked to spend time with our friends and family and express our emotions to them.”

The new and unique curriculum was launched by Delhi Education Minister Manish Sisodia with an aim to develop self-awareness and mindfulness amongst students.

“Its aim was to inculcate the skill of critical thinking and inquiry among the students,” said an Education Department official.

Why this curriculum? The official said the challenges in the school system had gone beyond learning standards and academic results.

“A research conducted on suicides in India has revealed that in addition to the challenges of learning and achieving, students come to school with stresses arising from many sources including family disturbances, peer conflicts, socio-cultural components and vulnerabilities to physical and mental health risk factors.”

The research revealed 26 suicides were reported every 24 hours due to issues including drugs, broken families, fights with friends and break-ups.

“Prolonged exposure to such stresses leads to long term physiological and emotional disturbances, which severely hinders a child’s learning and development.”

“Children learn in a variety of ways — through experience, making and doing things, experimentation, reading, discussions, questioning, listening, thinking and reflecting, and expressing oneself in speech, movement or writing, both individually and with others,” said the official from the Directorate of Education, Delhi.

Over 10 lakh students between Class 1 and 8 and about 50,000 teachers share the 45-minute Happiness Class.

According to Nikhil, a maths teacher in the government school, these activities help students to increase concentration.

“The results may take some time but for development of students, these activities are important,” he said.

The reflections and discussions will encourage students to utilise the skills in their life, he said, adding that the Curriculum moves a step ahead from the textbook based learning for an overall development of children.

“The students have an active participation in the class as the methodology of instruction is through activities, stories and discussions.

“The curriculum was designed to enable students to communicate effectively” he said.

The classes will also enable learners to apply life skills to deal with stressful and conflicting situations around them, he said.

In just one year into existence, the Happiness Curriculum has gathered attention from not just within India but also abroad.

Last year, when Afghanistan’s Acting Education Minister Mohammad Mirwais Balkhi attended one Happiness Class, he said he wished to have a similar concept in his country.